A Rye request for women canvassers

In 1867, the Liberal MP John Stuart Mill moved an amendment to the Reform Bill which would have given the vote in parliamentary elections to women. It was defeated by 196 votes to 73.

But while politicians continued to resist women’s suffrage for a further half century or more, they were clearly happy to call on women’s help in getting elected provided that they confined themselves to cheer-leading on behalf of male parliamentary candidates. 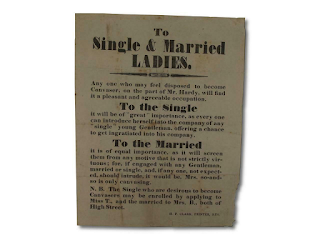 The poster reproduced here apparently shows an attempt by one parliamentary candidate to enroll women canvassers with the enticing opportunity to spend time in the company of eligible, or not so eligible, gentlemen.

Addressed to “Single & Married Ladies”, it promises: “Any one who may feel disposed to become Canvaser (sic), on the part of Mr. Hardy, will find it a pleasant and agreeable occupation.”

“To the Single, it will be of “great” importance, as every one can introduce herself into the company of any “single” young Gentlemen, offering a chance to get ingratiated into his company.”

“To the Married it is of equal importance, as it will screen them from any motive that is not strictly virtuous; for, if engaged with any Gentlemen, married or single, and, if any one, not expected, should intrude, it would be, Mrs. so-and-so is only canvasing.”

The poster carries the imprint of H P Clark, printer, Rye – which would suggest that it was produced for John Hardy, who took Rye from the Liberals on behalf of the Conservative Party in 1868 with a majority of just 14.

This was the first general election to be held on the expanded franchise introduced by Benjamin Disraeli’s Reform Act of 1867, which must have introduced a considerable amount of uncertainty into the process, and meant that few results could be predicted with certainty.

Hardy stood and won again in the general election of 1874 with an increased majority, and having changed his name to John Gathorne-Hardy in 1878 continued as a Kent MP until 1892. He later succeeded his father as the second Earl of Cranbrook.

The poster is somewhat extraordinary in its blatant suggestion to the women of Rye, married and unmarried, that canvassing in the election would provide the perfect cover for an illicit liaison. But can it be taken at face value?

Possibly this was an attempt by Hardy’s Liberal opponents to undermine his credibility and to create some sort of scandal. Perhaps he was known as something of a womaniser. Or maybe, just maybe, the poster can be taken at face value.