Sir Francis Burdett was for many years a powerful advocate of parliamentary reform. As MP for Westminster after 1807, he was a strong supporter of Catholic emancipation and advocated a series of radical measures that would later be included in the People’s Charter.

But he was no Chartist. Following the Reform Act of 1832, the fifth baronet drifted away from his earlier convictions, fell out with his notoriously radical constituents, and in 1837 got himself elected for North Wiltshire instead, where he became a staunch Tory.


He deserves a place here, however, not just for the radical causes he espoused in his heyday, but for his relationship with Feargus O’Connor, the leading light of the Chartist movement. 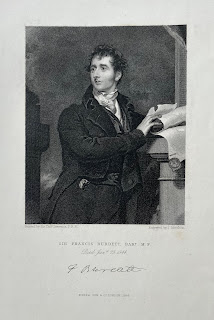 The print shown on the right, which I added recently to my collection, was clearly published in this format soon after Burdett’s death – the text noting, “Died Jan’y 23 1844". But it was equally obviously made many years earlier.

By the time of his death, Burdett was just two days short of his 74th birthday, and the Byronic hair was something of a distant memory. Other versions of the print can also be found flipped, so that Burdett faces in the other direction, some are nearly full length, and others still in colour.

Burdett was an old friend of Feargus O'Connor's father Roger, a prominent Irish nationalist, and an increasingly eccentric re-teller of Irish history - in a particularly imaginative interpretation of which, O’Connor emerged as the lineal descendant of the 12th-century king Ruaidrí Ua Conchobair.

Some sources suggest that Burdett raised both Feargus and his brother Francis (later to gain his own fame as Francisco Burdett O’Connor, a general in the army of Simon Bolivar, and subsequently a Bolivian Minister of War), although evidence of this is limited.

Whether or not this was the case, there are certainly accounts of Feargus and Francis fleeing their family home on stolen horses and seeking sanctuary in London with Burdett, after Roger was arrested in 1817 for allegedly organising a mail robbery.

In whatever way their relationship continued in later years, O’Connor seems to have found little need to show any favour to Burdett in the pages of the Northern Star – Burdett, having, by this time moved from radical Westminster to conservative North Wiltshire.

Neither is Burdett’s death recorded, other than in passing in a brief article lifted from another paper.
Posted by mark at Monday, May 11, 2020