In remembrance of William Lovett

Chartist memorabilia is getting harder to find. But I was delighted to come across this death/remembrance notice for William Lovett. 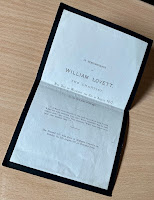 Working on behalf of the London Working Men's Association, Lovett was the author of the People's Charter and secretary to the First Chartist Convention. But he was sidelined in later Chartism by Feargus O'Connor and his supporters, and moved on to devote his energies to secular education.

The remembrance notice is typical of those produced at the time (Lovett died in 1877). Interestingly, it gets a mention in trade union newspaper The Bee-Hive's report of Lovett's death, and its text is quoted there in full.

Unlike some of those who went to their graves before him, Lovett was no populist and was never a great platform orator. Similarly, his funeral was quiet and attended mainly by those who had known him well - in contrast to the great outpourings of popular grief that attended the funerals of O'Connor and others.

I have written more here about the simple and secular funeral of William Lovett, and the tragic death and magnificent funeral of Feargus O'Connor.